On January 28th, 1897 a large crowd gathered at the Metropolitan Opera House in New York to watch a magic show. The show was to be a mystery because the world renowned magician, “Herrmann The Great”, had died just a month before. At the show the typical bicycle, animal, and acrobatic tricks were performed as normal. But when it was time for the main event, it was Herrmann The Great’s wife and assistant, Adelaide, dressed as the part of the magician.

Adelaide selected from the crowd a group of men who considered themselves marksmen comfortable with firing a rifle. She gave each of the men a rifle. She asked others in the crowd to make a mark on a bullet. The muzzleloader rifles were loaded and the group of men were brought on stage to face Adelaide Herrmann.

Herrmann held up a single small china plate in front of her chest. She asked the group of men to aim for the plate and fire all at the same time. The crowd waited breathless, having never seen a woman attempt such a dangerous trick. Music and lights added to the suspense as nervous riflemen prepared to fire. With a count the men fired their rifles and filled the stage with smoke. When smoke cleared and the audience calmed, Adelaide still stood, now holding the plate out with the bullets resting on it. The audience was permitted to confirm that the markings on the bullets were the same as those made by the audience before they were loaded into the rifles.

Adelaide Herrmann was not permitted much time to mourn the loss of her husband. Upon his death over a dozen employees waited for her to determine their fate. Their estate, varied assets, and debts required management and leadership. Adelaide Herrmann understood the number one rule of show business perfectly, “The show must go on.” She immediately took over the show and managed it herself for over 25 years. She became known as “The Queen of Magic” and one of the greatest of all time.

The phrase “the show must go on” can have many applications to education. Regardless of how a bus driver feels in the morning, the bus will not drive itself. Frequently finding a substitute is more difficult than working through whatever difficulty we face. I’m grateful for the many committed faculty and staff that ensure that learning goes on. Students have a wide variety of difficulties that might bring a stop to the learning, but we do our best to keep them progressing. Things happen, life happens, but education goes on, learning goes on.

Learning goes on in Week 34,

Addie has a children’s book as well: https://www.amazon.com/Anything-But-Ordinary-Addie-Adelaide/dp/0763668419 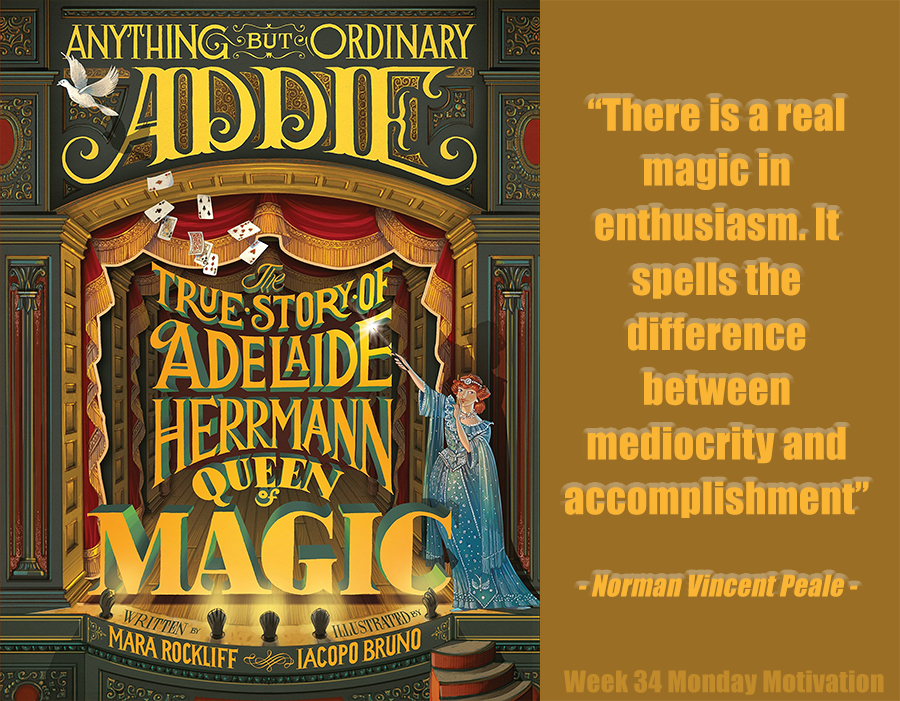