If you are a Utah Jazz fan you are probably feeling pretty good about how things are going this season. The Jazz have the best record in the NBA at 24-6 and the Jazz have won 20 of their last 22 games. They are leading the NBA in many statistical measures. The criticism the Jazz face is that despite being the league leader they will not have a player in the starting line-up of the NBA AllStar game. Critics believe the Jazz don’t have the “starpower” to go deep into the playoffs.

The Jazz have had 45 AllStar game selections since they started in New Orleans in 1974. Their first Allstar might not have received all the credit he deserved either. It was Pete Maravich. Most of Pete’s jersey’s simply said “Pistol” on the back. Many at the time did not consider Pete a “Star” because they did not like his style of basketball. His style of basketball was perhaps a couple generations too soon. He loved no-look passes, long shots, and off balance shots while driving to the basket. His style wouldn’t become common for a long time after.

In nearly every ranking of the greatest college basketball players, Pete Maravich is listed at or near the top. He could be referred to as the greatest college basketball scorer of all time. He averaged over 42 points a game in his three seasons at LSU. For perspective of how impressive that is, consider the following. The all-time NBA leader is Michael Jordan who averaged 30 points a game. College basketball games are only 40 minutes and NBA games are 48 minutes. In Pistol Pete’s day there was no shot clock, a team could keep you from scoring by simply holding the ball. In Pistol Pete’s day there was also no three point line. Pete only received two points for his long shots.

Pete’s NBA points per game average was brought down significantly by his last few years that he struggled with knee problems. He averaged over 31 points a game in his best season with the Jazz. He did it without the three point line and the shot clock that helped the high scorers to come. He also did it without other “stars” on the team.

It’s important that our students hear stories of how far hard work can take them. Far too many students miss their potential by believing they don’t have a natural “starpower” that other students do. Their style may be different, but they can make a difference in the world with their effort. Thanks for helping students learn in their own way and for helping them know they can be great.

Pete died at the young age of 40 of a heart attack while playing a pick-up game of basketball. His last words were “I feel great” just a minute before he died. He was the first jersey retired by the Utah Jazz. At age 11 he once made 500 consecutive free throws. 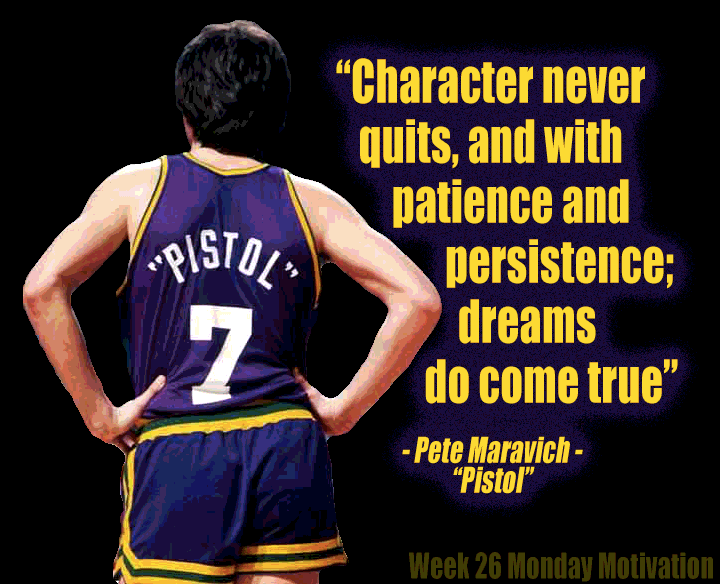