Piute’s bantam wrestlers had a surprise visitor to wrestling practice on Wednesday. Rulon Gardner is a friend of several Piute residents and has encouraged a good number of Piute wrestlers. Many of you have probably met Rulon and heard his story. For those that haven’t, it’s a good story.

Rulon learned hard work the way many Piute students do, working the family farm in Wyoming. Rulon had to work hard for everything. In school he struggled with a learning disability. He didn’t get to wrestle varsity until he was a senior, as his older brother was also in his weight on the team. He worked hard and started seeing a lot of success on the mat.

After a very successful senior high school year and a successful college career he set his sights to an olympic medal. His family took their first vacation away from the family farm to watch him wrestle at the 2000 olympic games in Australia. For the Gold Medal match he faced Aleksandr Karelin from Russia. Karelin had not lost a single international match….ever. He had won 29 gold medals over 13 years including 3 olympic gold medals. He racked up hundreds of wins and no losses. He carried nicknames such as “the Russian Bear” and “the Russian King Kong.” He was considered unbeatable. Despite comparable weights anyone that Karelin faced was referred to as the David in the David vs. Goliath matchup. When Rulon won the match it was called the “miracle on the mat.”

Two years after winning Gold Rulon was snowmobiling with friends in Wyoming. He got separated from his group and wrecked his snowmobile into a river. He was forced to spend a far below freezing night on the mountain alone. He was found 18 hours later in a state of hypothermia and frostbite. Miraculously he only lost one toe to the experience. Rulon recovered and competed in the 2004 Olympic games earning a Bronze Medal in Athens.

A few years after that he was in a small plane that wrecked right into Lake Powell. He and two friends had to swim two miles in cold 40 degree water to land. There they spent a cold night waiting for rescue.

As Rulon allowed Piute’s youngest wrestlers to hold his medals he bent down a little and spoke to them. He said speaking of Karelin “He had never been beaten, but I out worked him, I out lasted him, and I beat him.” The hard work our students learn in Piute County can take them anywhere they want to go. Rulon published a book called “Never Stop Pushing: My Life from a Wyoming Farm to the Olympic Medals Stand.” Our students need good teachers and coaches to keep pushing them. Thank you for helping in that effort.

The Miracle On The Mat Match: https://www.youtube.com/watch?v=oVT3-wbL8HU 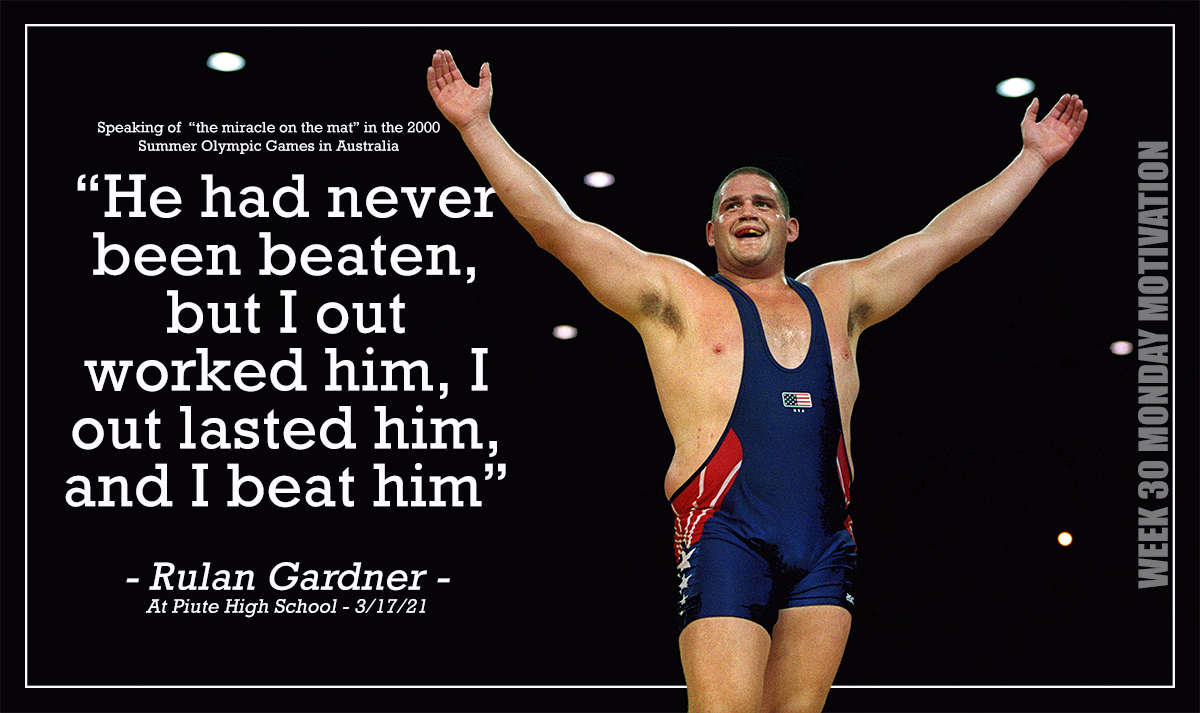